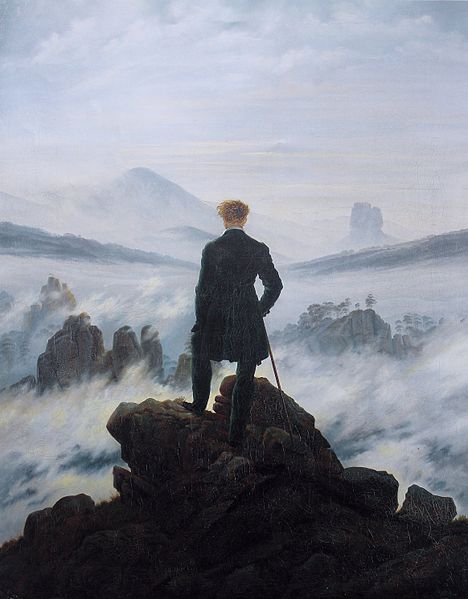 So, it’s the last Friday of the month and I’m supposed to have my Year of Important Books post ready. Whoops. Still reading the book…so we’ll get to it next month. In the meantime, how about a little Lord of the Rings mixed up with Anglo-Saxon history? Without further ado, I present….The Wanderer.

One of the poignant moments in Peter Jackson’s The Two Towers is the scene where King Théoden, newly restored to himself after Wormtongue’s enchantment, prepares for the upcoming battle of Helm’s Deep. Have a listen:

Wonderful! Just this little snippet made me want to go back and watch all three movies, but I digress…

The poem that Théoden quotes here comes from Tolkien, but in the book it is said by Aragon, as he introduces the Riders of Rohan to his companions. It has been condensed somewhat in the film, the original version is this:

Where now are the horse and the rider? Where is the horn that was blowing?

Where is the helm and the hauberk, and the bright hair flowing?

Where is the harp on the harpstring, and the red fire glowing?

Where is the spring and the harvest, and the tall corn growing?

The days have gone down in the West behind the hills into Shadow.

Who shall gather the smoke of the deadwood burning?

Or behold the flowing years from the Sea returning?

One day I am going to do a longer post about Tolkien, the Anglo-Saxons, and Aragon in particular, but for today I wanted to give you just a little tidbit, illustrated by this poem. 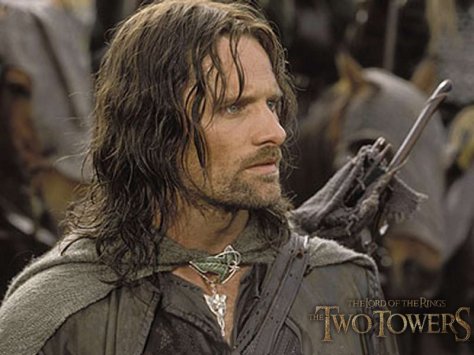 Ah, yes, Aragon, aka Strider, aka son of Arathorn, aka heir of Esildur, aka…well, stay tuned to the blog to find out!

Tolkien, of course, was an Anglo-Saxon scholar, and in particular he modelled the Rohirrim after the people and culture of Anglo-Saxon Britain.

This poem that Aragon quotes is adapted from one of the poems that survive from that period, called The Wanderer. It begins like this (translated, of course, from Anglo-Saxon):

Often the solitary one

finds grace for himself

the mercy of the Lord.

must for a long time

(along) the ice-cold sea,

tread the paths of exile.

Events must always go as they must!

This poem can be found in the 10th century anthology of Anglo-Saxon poetry called the Exeter Book, but many scholars believe that this poem existed long before then in oral tradition, and could date back to the 6th century.

The poem itself is about a warrior who is wandering in exile, having lost his liege lord, kin, and comrades in battle, defending his homeland from attack. It is melancholy in nature, which comes as no surprise – for in the Anglo-Saxon culture with its emphasis on close family ties and allegiance to a lord, to be alone in a strange land with no kin or lord to protect you is almost a fate worse than death.

In the first stanza quoted above, you can see a fascinating mix of the old Saxon religion and beliefs and the new Christian ones. It shows a culture in the midst of transition from the old ways to the new. The opening lines show that the warrior is looking for mercy from God, but at the end of the stanza you see “Events must always go as they must!”

When you look up this poem you will find that there are many different ways to translate the Anglo-Saxon original, so that last line I can also find translated as, “Fate is established!” or “Fate has been decreed.”

This is the Saxon concept of wyrd, the inexorable fate that binds every person, that cannot be denied. So the poem begins with both the Christian concept of God’s mercy and the Saxon idea of fate. And you will see these two world-views juxtaposed throughout the poem.

In the midst of The Wanderer is the part that Tolkien adapted for The Two Towers. It comes in the poem after the warrior has contemplated the brevity of life, “as now in various places throughout this middle-earth walls stand, blown by the wind, covered with frost, storm-swept the buildings.” After meditating on this the warrior says,

Where is the horse gone? Where the rider?

Where the giver of treasure?

Where are the seats at the feast?

Where are the revels in the hall?

Alas for the splendour of the prince!

How that time has passed away,

dark under the cover of night,

as if it had never been!

It’s all a bit gloomy, I’ll admit, but I can imagine the effect of the scop singing or reciting this poem on the people gathered in the mead hall, snug against the winter storms, surrounded by their kin and secure in their own place in the world. It would have given both a sobering contemplation of the fate of the exiled stranger, and the delicious relief that they were not him. Kinda like the effect of a thunderstorm when you are in bed, you feel extra cozy knowing that you are  not outside in the storm itself.

The Wanderer ends with the counsel, “It is better for the one who seeks mercy, consolation from the father in the heavens, where, for us, all permanence rests.” The Christian world-view has obviously won out for the original writer of the poem. Of course there are other speculations that one could make, for example, that some scribe along the way altered the poem, adding more overtly Christian elements than were originally in there. It’s hard to say, and I guess we will probably never know.

One of the best ways to understand a culture is to read their literature. Unfortunately, as the Anglo-Saxon culture was in many ways an oral culture, we have lost so much of their stories. I’m so glad this poem survived to open up to us the world of the mead-hall, and to enable us to meet the exiled wanderer, journeying alone through the icy mist.

I took my translation of The Wanderer from Anglo-Saxons.net. Hop on over there if you want to see the whole poem in Anglo-Saxon along with the English translation.

And just for fun, click here if you want to hear it read in the original Anglo-Saxon.

Featured photo: Wanderer Above the Sea of Fog, by Caspar David Friedrich, from WikiCommons

6 thoughts on “The Wanderer”

I love speculative fiction, because I think that stories about other worlds and impossible things give us new perspectives on our own lives.
In my stumbling way I am following Christ, travelling down a long path towards home. Come along with me and I’ll tell you some stories along the way about places both familiar and strange. I can’t guarantee you will like all those places, but I hope you will leave them intrigued by the complicated messy mystery we call life.