There is an important historical document (er, documents…but more on that later…) from the Early Middle Ages that I will confess I hardly looked at when doing my research for my trilogy. Which might seem odd, seeing as I have already explained how there are very few contemporary historical documents from this era. So why did I not dive into the Anglo-Saxon Chronicle?

The statue of King Alfred the Great, by Hamo Thornycroft, erected in Winchester in 1902. I really love this king. I will definitely write a blog post about him some day!

Part of the reason was timing. This chronicle was begun, as far as we can tell, sometime around the year 891 AD, during the reign of Alfred the Great, in Wessex. So it mainly describes the events after that year, although there is some reference to what happened before that, starting at Caesar’s invasion in 60 AD. But mainly that history was taken from other sources, most importantly from Bede’s Ecclesiastical History of the English People, and so I relied more on Bede’s accounts than the Chronicle, as Bede’s was the more contemporary source.

Another reason was that of setting. As Alfred was King of Wessex, he was most interested in chronicling the history of the kingdom of Wessex in particular. Understandably, of course. So while there are details about that kingdom in the Chronicle (especially regarding those years before the scribes starting writing it) there is not much about the northern kingdoms, which of course I was more interested in. Not to say that there weren’t interesting things happening in the south, but you can only cover so much, right? So, for example, here is the entry about the year that my book opens, 643 AD:

A.D. 643 . This year Kenwal succeeded to the kingdom of the West-Saxons, and held it one and thirty winters. This Kenwal ordered the old church at Winchester to be built in the name of St.
Peter. He was the son of Cynegils.

As you can see, not much there that could help me with my book, which is set in the kingdom of the Angles, in Bernicia and Deira.  In contrast, here is a random entry from the year 978 AD. At this time scribes were writing down what they thought was pertinent information as each year passed, so you get some fascinating tidbits about the year’s events:

A.D. 978 . This year all the oldest counsellors of England fell at Calne from an upper floor; but the holy Archbishop Dustan stood alone upon a beam. Some were dreadfully bruised: and some did not escape with life. This year was King Edward slain, at eventide, at Corfe-gate, on the fifteenth day before the calends of April. And he was buried at Wareham without any royal honour. No worse deed than this was ever done by the English nation since they first sought the land of Britain. Men murdered him but God has magnified him. He was in life an earthly king — he is now after death a heavenly saint. Him would not his earthly relatives avenge — but his heavenly father has avenged him amply. The earthly homicides would wipe out his memory from the earth — but the avenger above has spread his memory abroad in heaven and in earth. Those, Who would not before bow to his living body, now bow on their knees to His dead bones. Now we may conclude, that the wisdom of men, and their meditations, and their counsels, are as nought against the appointment of God. In this same year succeeded Ethelred Etheling, his brother, to the government; and he was afterwards very readily, and with great joy to the counsellors of England, consecrated king at Kingston. In the same year also died Alfwold, who was Bishop of Dorsetshire, and whose body lieth in the minster at Sherborn.

Compared with the terse, factual events of the 643 AD entry, there is lots of drama and intrigue here! The collapse of an upper floor of a building which killed and maimed many of the important counsellors to the king; the king himself murdered and hastily buried without due honour, which prompted a medieval tongue-lashing from the outraged scribe; and the king’s brother, Ethelred, consecrated king with “great joy”. Hmm. My writer’s brain could do a lot with this. The death of the counsellors, prompting some instability in the kingdom? The elder statesmen, who could have tempered the younger hot-heads, gone, allowing youthful ambition to fester? Was it perhaps the king’s brother, with the aide of those younger counsellors, behind the plot to kill the king and so gain the throne? Which is why he was welcomed so eagerly? Lots of things one could research further and write about!

This immediacy of detail is the most fascinating and valuable aspect of the Chronicle. But it is not just one document. The Chronicle is actually several different documents. The original one was begun in Wessex at Alfred’s command, and several copies were made of it and sent to various monasteries across Britain. From there those documents were independently updated as the years went by. In one case the Chronicle was still being updated in 1154! All told, nine manuscripts survive for us to study today. 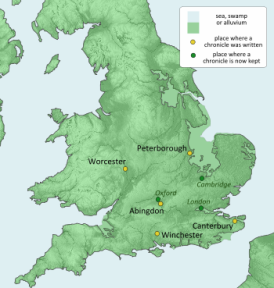 This map shows the various places the surviving chronicles were written, and where they are now kept. As you can see, the focus was definitely on southern England.

Of course these documents that make up the Chronicle cannot be seen as being 100% accurate, even though they were being written contemporarily. There are parts where the different versions contradict each other for the same year, and there could be many reasons for that. The scribes would rely not only on their own knowledge of what happened that year, but also on word-of-mouth as to what happened in the rest of the country. So information certainly could get easily distorted. And sometimes, the scribes, having agendas of their own and kings that they were beholden to, would distort information to favour these. Propaganda is a very old art, indeed. The whole idea of objectivity would have been quite foreign to their mind set, so all the information has to be cross-referenced with whatever sources can be found outside of the Chronicle to get a closer handle on exactly what happened.

The opening page of the Peterborough Chronicle, the latest surviving version, begun in 1120, after the monastery was destroyed by fire. If a monastery’s copy of the Chronicle was destroyed or lost, other monasteries would lend their copies so that the monastery could copy the entries from before the date their copy was destroyed, and begin again the contemporary entries. In this case, although the earlier entries were transcribed in the original Anglo-Saxon (Old English) the newer parts contain some of the first written examples of Middle English.

But even with these caveats, this marvellous undertaking  opened up a window to this era that is invaluable to historians and interested amateurs alike. We owe a great deal of debt to the foresight of King Alfred, who made the original decision to begin to write down the events of his kingdom, as well as to Bede, whose account  likely inspired him to begin a similar work.

The Chronicle is seen as the single-most important document to come out of the Early Medieval period. Our knowledge of this time would be scarce, indeed, without it.

4 thoughts on “The Anglo-Saxon Chronicle”