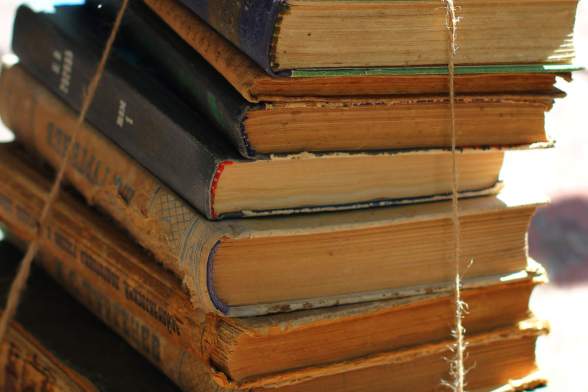 This book, published in 1972, will forever be associated with the taste of malted chocolate Easter eggs in my mind. My parents had a tradition of giving us a small gift at Easter, often a book, and happily in Easter of 1975 I found Watership Down, by Richard Adams, propped up at the foot of my bed as I awoke on Easter morning. After searching through the house on the Easter egg hunt, I happily settled down with my new book and my favourite Easter treat – “robin’s eggs”, malted chocolate eggs covered with a hard candy shell, speckled to look like eggs. 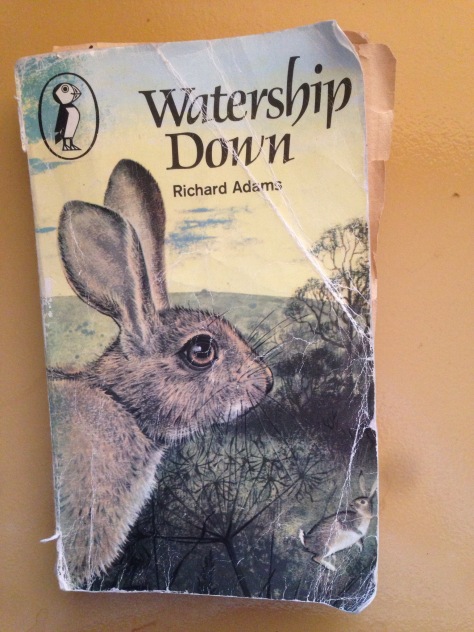 This book has seen a lot of love, as you can see.

The other books I have read in my series thus far were classics long before I got to read them. With Watership Down I got in on the ground floor, so to speak, as this book has since become a literary classic, beloved by many. I’m not sure exactly why my mum picked this book for me, but I can guess at two reasons. One being that the cover featured a picture of a rabbit, which seemed to fit the Easter theme, I suppose.; and secondly, in order to forestall my never-ending quest to get a dog my parents had relented a few years previous and allowed me to keep the baby bunny the neighbours had given me. So naturally they would have assumed a tale about rabbits would appeal to me.

And they were right. As I ate my Easter candy and began to read this story of Hazel, Fiver, Pipkin, Bigwig, and the rest, I quickly got caught up in the tale and after that first reading went on to re-read it many, many more times.

Adams was born in 1920 in England, and yes, he is still alive! At the time of this writing in 2016 he is 96 years old. Watership Down was his first book. The genesis of this book, like so many of the others I have read this year, was in tales told to his daughters, who then begged him to write them down. But this beloved book did not have an easy time of it. Four publishers and three writing agencies turned down the book before Rex Collins took a chance on it and published it in 1972, and the rest is history. The book went on to win two of the most prestigious British book awards: the Carnegie Medal and the Guardian Children’s Fiction Prize.

Richard Adams reading from Watership Down at a 2008 exhibition of paintings by Aldo Galli, which illustrated a special anniversary edition of the book. Photo by Andrew Reeves-Hall

The book follows the adventures of a group of rabbits who leave their warren on the promptings of a prophetic rabbit named Fiver who has forebodings of disaster to come if they stay put. Hazel, the sensible rabbit who becomes the group’s steadfast and courageous leader, gathers the small number of rabbits who are willing to listen to Fiver’s warnings and together they leave the warren, heading for the hospitable terrain of Watership Down, some 4 miles away. Not a long journey for a man, but for a group of rabbits out in the open, without holes to bolt into at the first sign of danger, it is a long and harrowing trek, dodging men and their snares and guns, predators and even other rabbits. But through their journey the group becomes a tight knit group of companions, and arrive at Watership Down relatively unscathed. But danger lurks there, too, as they soon discover.

In a bid to obtain some does for their warren (the ones who leave with Hazel are all bucks), they encounter the strange warren of Efrafra, ruled over by the foreboding and dictatorial General Woundwort. Suffice to say that Hazel quickly realize their task will not be easy, and that they must draw on all their strength and courage, and a little rabbit trickery besides, to achieve their goal.

On the back of my copy of the book there is a quote from The Times in London, which states, “Mr. Adams wanted to write ‘a proper grown-up novel for children’, and this is what he has achieved.” This is a marvellous summary of this book. It is a children’s book, but it is so much more.

Right away, in the opening paragraph of the book, Adams grounds his rabbits in a realistic setting.

The primroses were over. Towards the edge of the wood, where the ground became open and sloped down to an old fence and a brambly ditch beyond, only a few fading patches of pale yellow still showed among the dog’s mercury and oak-tree roots. Not he other side of the fence, the upper part of the field was full of rabbit-holes. In places the grass was gone altogether and everywhere there were clusters of dry droppings, through which nothing but the ragwort would grow. A hundred yards away, at the bottom of the slope, ran the brook, no more than three feet wide, half-choked with king-cups, water-cress and blue brook-lime. The cart-track crossed by a brick culvert and climbed the opposite slope to a five-barred gate in the throne hedge. The gate led into the lane.

The May sunset was red in clouds, and there was still half an hour to twilight. The dry slope was dotted with rabbits – some nibbling at the thing grass near their holes, others pushing farther down to look for dandelions or perhaps a cowslip that the rest had missed.

There are many passages and details like this in the book – so many flower and trees and trees are named that at times I felt like I needed to stop and Google-search them all. But this realistic portrayal of a particular, small piece of British countryside, a hill in the north of Hampshire, England, where Adams himself grew up and obviously knew intimately, adds immediate realism to the more fantastical parts of the book – Adams’ imaginative take on rabbit society, language, and myths.

Adams researched the life and habitats of rabbits, and in particular pays credit in the introduction to Watership Down to a book by R. M. Lockley called The Private Life of the Rabbit as a book that gave him particular inspiration. Indeed there are times in the book where Adams quotes from Lockley’s book directly. Therefore the rabbit behaviour in Watership Down is very accurate and gives the readers a whole bunch of fascinating information about rabbits that they likely didn’t know.

The book that Adams relied on for his research, by Welsh ornithologist and naturalist Ronald Lockley. Adams and Lockley were friends, and subsequently introduced Lockley as a character in Adams’ later novel, The Plague Dogs.

But it is not just factual information about rabbits that Adams presents to the readers in his book, he invents a whole language (called Lapine), social structure, and mythology for rabbits as well. And this is what makes the book really come alive. In particular, the legends and tales of the rabbits’ legendary hero and founder, El-ahrairah, which are interspersed in the book, serve to make this rabbit society one with great depth and complexity.

There is no doubt that this book can be frightening and disturbing to children at times. The animated film based on the book, released in 1978, has been responsible for many a nightmare and complaints by parents, who thought they were taking their children to see a Disney-esque movie about bunnies. The rabbits in this book are in great danger, and some of them die. For myself, it was the depiction of Bigwig in the snare that really haunted me.

But the menacing figure of General Woundwort and his rule of the cowed rabbits of the Efrafra warren is the largest shadow that looms large over the idyllic life that Hazel builds for his rabbits at Watership Down, and the plot to best Woundwort and steal some does away from Efrafra is the highly entertaining and suspenseful climax to the book. I was just as caught up in this during my read of the book as an adult as I was when I was younger.

Interestingly enough, the BBC and Netflix are teaming up to produce a new animated mini-series adaptation of the book, to air in 2017, with actor James McAvoy as the voice of Hazel. Their hope is to do a faithful adaptation of the book but to tone down the scary parts which made the earlier animated film so disturbing to children. I am very much looking forward to seeing this, and will write a review on it once it airs.

I really enjoyed re-visiting this book again, and highly recommend it to upper elementary aged children and up.

2 thoughts on “Year of Important Books: Watership Down, by Richard Adams”