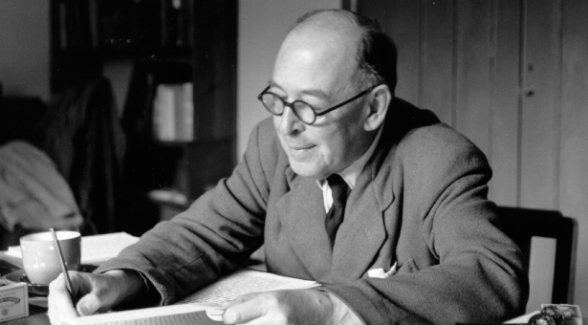 A Grief Observed was published in 1961, after the death of Lewis’ wife Joy (of cancer) in 1960. Interestingly, Lewis published this under the pseudonym N.W. Clark,, as he did not wish to be identified as the author. It was only published under his real name in 1963, after his own death.

The book is a compilation of his journal entries in which he expresses his journey through grief and the struggles he faced along the way. He did not mean it to be an exploration of the universal experience of grief, rather, it was the honest look at what grief looked like for him, after Joy’s death (called H in the book – her first name, rarely used, was Helen).

I used the word “honest” above, and above all, this is how this book struck me. I read this book first as a teenager, and death had not touched me in any significant ways. Re-reading it now, after I have suffered the uncomfortable presence of death more than once, was a much different experience.

Right from the first line, “No one ever told me that grief felt so like fear.” you get the sense that Lewis would not be holding anything back in the exploration of his feelings as he walked through grief. And being Lewis, his feelings are not the only thing he examines. He is a Christian, he wrote the Problem of Pain a few years back, and now his own words on the subject are haunting him. How does a Christian really deal with this kind of pain? As he says, “Not that I am (I think) in much danger of ceasing to believe in God. The real danger is of coming to believe such dreadful things about Him. The conclusion I dread is not, ‘So there’s no God after all,’ but ‘So this is what God’s really like. Deceive yourself no longer.'” And what Christian who wrestles with the dark times has not faced this fear, too? At one point in the book Lewis explores this further, wonders how we can call God “good” when we are faced with so much pain. How can we trust Him when, as in their case, prayers were seemingly answered for healing (Joy went through an unexpected remission) but then the cancer returned? As he writes, “Time after time, when He seemed most gracious He was really preparing the next torture.”

Strong stuff. But the very next sentence is, “I wrote that last night. It was a yell rather than a thought. Let me try it over again.” Lewis’ great strength, his intellectual honesty, comes to the rescue. It would have been easy for him to edit that “yell” out of the final manuscript. But keeps it in, along with the exploration that follows as he wrestles with the question is it rational to believe in a bad God? And in doing so we understand that it is okay to question in the midst of our pain and grief. In this, as in so much of his writings, Lewis offers a hand in friendship to us.

This painful examination of the depth of his faith shows how grief has stripped away his certainty of the goodness of God. “If my house has collapsed at one blow, that is because it was a house of cards. The faith which ‘took these things into account’ was not faith, but imagination….I thought I trusted the rope until it mattered to me whether it would bear me. Now it matters, and I find I didn’t.” Lewis doesn’t shy from this examination, he faces it head on and forces himself to think through how his faith fits in with this new reality he finds himself in.

“Her absence is like the sky, spread over everything.” The terrible, unrelenting loneliness of grief is also discussed, along with the fear that Lewis felt in the fading of Joy from his life and memory.  “What pitable cant to say, ‘She will live forever in my memory!” Live? That is exactly what she won’t do. ….as if I wanted to fall in love with my  memory of her, an image in my own mind!”

In many ways, although this is certainly a book about one man’s journey through grief, it is so much more. It speaks to all of us who have experienced pain. It is the counterpoint to A Problem With Pain, the working out in reality of the principles expressed in that book. And that is perhaps one of the reasons why Lewis decided to publish this anonymously at first. He probably didn’t want all sorts of comparisons between that work and this, and gleeful pronouncements from his detractors along the line of “In that book he talked all about the goodness of God despite the reality of suffering, well, look at him now! Wallowing in his pain like the rest of us!” Publishing this book anonymously allowed for it, and the ideas it expresses, to stand alone and be contemplated in their own right.

If you have suffered through the death of a loved one, you may find that Lewis’ journey as expressed in this book was not your own. Which is understandable, for all of us are unique. But I can hardly imagine that you won’t get some comfort out of it, all the same. Especially if you are a person of faith, you will find his honesty refreshing and ultimately, reaffirming.

Lewis comes to the conclusion, “God has not been trying an experiment on my faith or love in order to find out their quality. He knew it already. it was I who didn’t.” In other words, this great trial forced him to see just how weak his faith really was, which is not always a bad thing. The Cosmic Sadist (as he calls God in one point of the book) is turned into a wise Vet, who is causing pain to a creature who can’t understand the need for it, in order to bring them healing.

There is much room for contemplation in this book, for although it is hard, emotionally, to read  at times, Lewis’ rigorous examination of himself in the midst of his grief gives us permission to wrestle with the questions he poses as well. Once again I am filled with admiration for his skill in illuminating difficult topics for us. Surely this was one of the worst times in his life, and yet he offers these words he wrote in the midst of it to us as a gift, in order to shine a little light in our own dark times, and above all, to show us we are not alone in feeling doubt, fear, anger, and depression in the midst of them.

And for that, I am grateful.

6 thoughts on “A Year of Reading Lewis: A Grief Observed”